The following is a small write-up written almost a year back, 17th December 2008 to be exact. Now, it’s been updated with some more info.

The other day I was told that there is a specific sutra in Jaimini, which gives a combination for blindness. Yesterday, I searched for that sutra and found it in 1st chapter, 3rd Pada. The relevant sutra is given below.


Let us see what our commentators dealt with this sutra.

Sri Rangacharya (adopted from Telugu commentary): If Panchama Arudha (A5) is occupied by Rahu and aspects by Sun, and then there will be loss of eyesight.

Sri Sanjay (JMUS): Venus and Gaunapada aspected by or conjoined by Rahu and Sun cause blindness.

Somanatha - Kalpalatha : If Rahu occupies the Arudha of 5th house of Lagna and aspected by Sun, there will be loss to eyesight. Gaunapada means Panchama Arudha (A5).

Now, I will explain how to come to the above interpretations.

But, Sri Sanjay takes shukra as the planet Venus, and gounapada as Arudha of 12th house, and interprets accordingly.

Yet, it was clearly mentioned in the sutra śukrāt meaning that from śukra. Now, I am giving my interpretation and please read on.

The Sage Jaimini as I always put it that He is very cryptic and puts a lot into small words. When He says śukrāt, literally he means to count from Lagna as per katapayadi system. Next he says gounapastho, meaning either from A5 or UL since Gounapada is another name for Upapada according to BPHS. But houses are counted from lagna only unless otherwise stated; hence Sage need not verbatim instruct us to count from Lagna. Instead, He can safely say गौण पदस्थो राहुः सूर्य दृष्टो नेत्रहा निः (gauṇa padastho rāhuḥ sūrya dṛṣṭo netrahā (niḥ) which suffices the above interpretations.

Hence, interpreting śukrāt as from Lagna may not suffice to convey the Sage intention. If we see the other sutras, Sage never said shukaat for Lagna. He used Leya, Pitri etc for Lagna. It is well known fact that Venus and Sun are taken as Karaka for eyesight in different systems. If we take the katapayadi value for Pada also then, प - pa(1), द - da(8),  9.

So, I interpret in the following way.

The 5th or/and 9th house from Venus/Lagna are aspected or conjoined by Rahu and Sun causes blindness.

One can argue that Sage can simply say त्रिकोणे (trikoṇe), instead of गौण पदस्थो (gauṇa padastho). Well, that’s also possible, yet I am giving below some of the example charts where the above interpretation worked and request the readers to ponder. 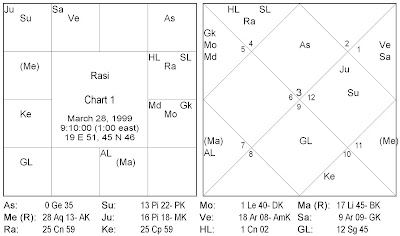 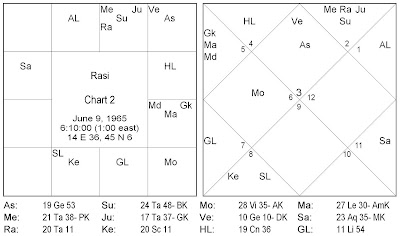 In the chart 2, Venus occupies Ascendant Gemini. The 5th from Asc and Venus is aspected by Sun and Rahu from Taurus. In fact, the 5th house is aspected by all malefic planets viz, Sun Rahu, Mars, Saturn and Mercury excepting aspect of Jupiter. 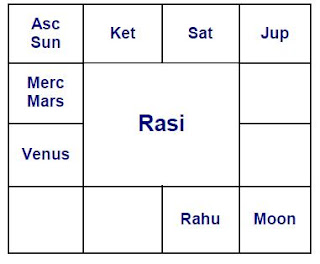 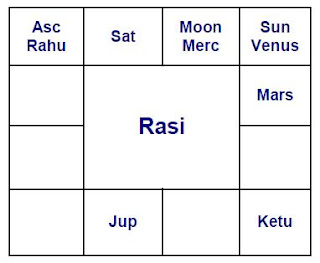 In the above chart, neither 5th nor 9th from Venus is aspected by either Rahu or Sun. But as an extension of the above principle, we can take aspect/ conjunction of Rahu and Sun with Venus/Lagna also. Since Lagna is also one trine sign. See, the aspect of Rahu on Venus from Pisces and the aspect of Sun on Lagna from Gemini. 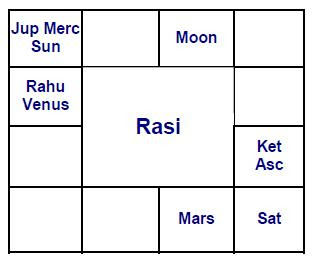 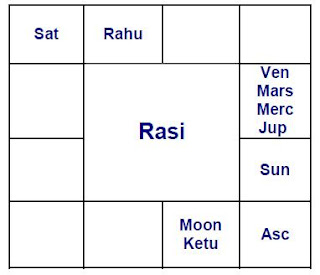 The 5th from Lagna is aspected by Sun, the 5th from Venus aspected by Rahu and Venus, Mars, Mercury, Jupiter. The native is having one eye blind, but can see from the other eye. See the exalted aspect of Jupiter from Cancer to the concerned houses. 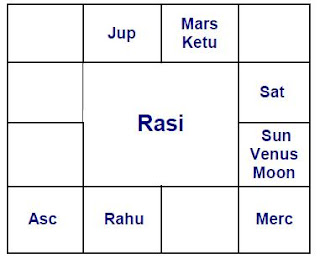 The 5th house (9th house from Venus) is aspected by Rahu and Sun. Sun conjoined Venus in Leo and aspect by Jupiter on the above combination. The native went surgery in his 7th year and emerged successful.

The word sukraat might be the key here. It is just redundant if Sage intends to say from Lagna as I explained above. Remember Sage Jaimini never wastes a letter, forget a word. But, Lagna can be taken Upalakshana and it can be observed in Mandooka dasa interpretation also, where sthoola has been interpreted to mean both Lagna and Seventh house.

I just tried on seven charts. I request you all to work on this sutra. Let’s see how it works.

Today, I was referring to BPHS (Telugu commentary) and found to my surprise, that the views expressed by me were also endorsed by BPHS. In fact, the verse of BPHS mentions as follows.

BPHS: If Rahu occupied in any of the trines from either from Venus or Karaka or Arudha Lagna and aspected by Sun leads to blindness.

So, here the available verse of BPHS doesn’t mention about either Panchama Arudha or the Upapada. It clearly mentions the trines which is the Katapayadi numeric of Gauna and Pada. Further, the Telugu commentator wants us to take the stronger fifth house from the Venus, AK and AL and the Arudha of that particular house obtains the given combination of Rahu and Sun leads to blindness.

It was an elaboration of a well known principle, because 2nd house rules 'eyes'(natural 2nd lord is Venus) and the "dharma' of the eyes (which is eye sight)is seen from 9th from the 2nd house, which comes to 10th house. 9th from 9th is 5th house...in this sutra there is an extension to natural 2nd lord, Venus. If 10th house in a chart is influenced by Rahu and Sun, and if there is no redeeming influence of Jupiter, then also blindness can happen-regards, Lakshmi

Can you let me know ur email? Sorry, I had to post here since I had no other way of contacting.

I have downloaded Ventakesha's commentary on Jaimini from Saptarishi website and am translating it for my own use. I think one page of the commentary is missing because of which I am stalled.

PS: You can check the commentary here if interested.

I Have a doubt about Jaimini's work

Is this book available in print or ebook form

I dont know about a work named "Gnana Deepika" by Sage Jaimini.

I know a book "Jaimini Gnana Pradeepika" by Solai Kannan published by M/s Sagar Publications. I haven't read it abut had a glance view of it in a book shop and I dont remeber its contents.

I hope it is a primer on Jaimini.

Thanks for the reply

''jaimini gnana Pradeepika'' is what i got when i did a google search.I shall buy the book to see what it contains.

Now after thinking for long it appears to me that '' Gnana Pradeepika" and Pragnanaa Deepika" might be the same book with "pra'' interchanged.It is a work on Horary Astrology

After connecting the Google search results i was wondering whether Jaimini rishi wrote something on Horary astrology.I dont know why the book written by Kannan has the title "gnaana pradeepika".Very misleading.

Thank you for posting such a valuable insight and elaborating with examples!

Do you know what the saints/guru say about remedy for such cases?

My cousin was diagnosed with usher's syndrom, which causes the gradual decrease of one's sight until blindness. It was noticed on Ra/Ju/Ve VD (Started from MO. It's a genetic desease. Rahu is in the fifth from lagna in pisces, while aspects fifth and 9th from Ve (yuti Sun and Mars) in the 10th house Leo. Sun is also aspecting the 9th house from Ve, which is Aries with Retro Jupiter. Does the remedy lies in strengthening Jupiter with proper gemstones and mantra?

Her birthdetails are as following: 4 september 1987 10h52 Brasilia Brasil.

Your method explained what the others couldnt explain, so I feel you are on the right track on this interpretation.

My wife's is Cancer Lagna. Sun is in sixth in Rasi chart with mercury and saturn and debilitated in Navamsa with Moon and Saturn. Venus is with Rahu in seventh in Rasi chart. She has been wearing glasses since 3rd year and has -13 power in both eyes.