Members on Sohamsa group definitely get furious by the comments passed on by me regarding BPHS and Sri Narasimha’s interpretation of Drig dasa. In fact, most of the list members may be in the view that whatever Sage Jaimini told in his upadesa sutras are also told by Sage Parasara in BPHS. And Sri Sanjay and others also advocated the same point. My Guru Sri Iranganti Rangacharya always tells that to learn Jaimini one must study the Vriddha Karikas. I just reiterated the same on the list. I also pointed out the slokas given by Sri Narasimha are just in toto Vriddha Karika slokas. In fact, I went to the extent of quoting that without Vriddhas, is like Sailing without a compass.

Now in this post, I am going to prove my point once again with the following example.
The Adhikara Sutra of Jaimini regarding Trikona Dasa.

On page 214 of Jaimini Maharishi’s Upadesa Sutras, Sri Sanjay gave the relevant sloka from BPHS regarding the interpretation of Trikona Dasa. 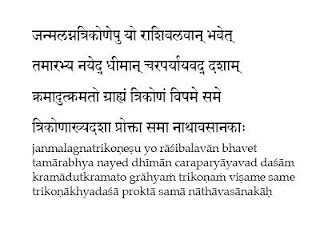 The commentary by Sanjay reads as follows.
The Trikona dasas begin from the ascendant, fifth or ninth house whichever is strongest. The periods of the dasas are the same as Chara dasa. After the trines, the dasa progress to the second house from the initiating sign and its trines and so on. The succeeding signs are reckoned zodiacally or reverse depending on whether the ascendant in odd or even.

Now, I am giving below the relevant Vriddha Karika slokas and readers can easily find out what went w 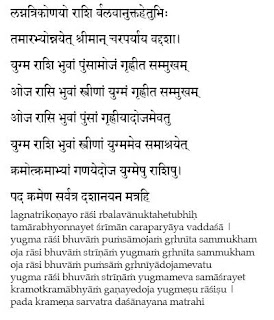 rong.
Let me explain, why I quote only Sanjay’s translation here. Sanjay clearly knows what Chara paryaya dasa is and he explained the same in page 298 and 299 of his book, though he doesn’t follow all types of padakrama. When the second line of the sloka in BPHS clearly says

Don’t you see that some lines in between are missing in the slokas of BPHS? The missing lines are the ones that differentiate this particular dasa from other sampat dasa namely Chara Paryaya dasa. Does any body know that we have conditional dasas in Jaimini as well? In my humble view, this one is a conditional dasa. The key of this dasa is the stronger house. Then, how to select the stronger house between Lagna, 5th house and 9th house? Does anyone here offer any idea of what Jaimini instructed regarding this dasa? The answer lies with Jataka Sara Sangraha by Raghava Bhatta, which I will bring soon.

Next, the Vriddha Karika sloka deals with how to choose the starting dasa sign for male and female natives. The key here is one source of strength. Some scholars mix up the strengths without understanding the purpose of each source of strength.

Meanwhile readers will do well to read my Guru’s translation of Jaimini Sutras, where it was clearly explained. In fact, this blog is named in reverence to my Guru’s book Jaimini Sutramritam.

Let the knowledge come from everywhere

Thank you for presenting Jaimini in a rational way accoring to the teachings of our guru Sriman Iranganti Rangacarya.